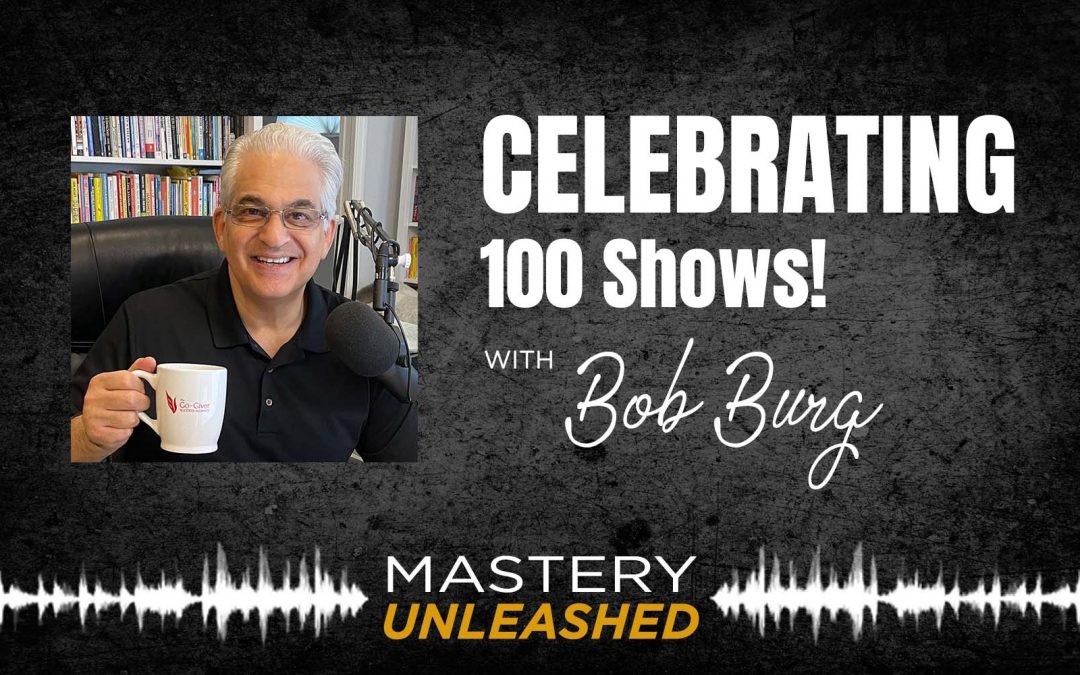 On today’s milestone show, Christie celebrates episode #100 with sought-after speaker, national bestselling author, and friend Bob Burg. Together they dive into an engaging conversation on a wide range of topics, including leadership, networking, authenticity, and the importance of stories in business.

Bob Burg shares how a subtle shift in focus is not only a more uplifting and fulfilling way of conducting business but the most financially profitable way, as well. For 30 years, he’s helped companies, sales leaders, and their teams to more effectively communicate their value, sell at higher prices with less resistance, and grow their businesses based on Endless Referrals.

Bob has regularly addressed audiences ranging in size from 50 to 16,000 — sharing the platform with notables, including today’s top thought leaders, broadcast personalities, Olympic athletes, and political leaders, including a former United States President.

Although for years, he was best known for his book Endless Referrals, it’s his business parable, The Go-Giver (coauthored with John David Mann), that captured the imagination of his readers.

The Go-Giver, a Wall Street Journal and BusinessWeek Bestseller, has sold over a million copies. Since its release, it has consistently stayed in the Top 25 on Porchlight’s (formerly 800-CEO-READ) Business Book Bestsellers List. The book has been translated into 30 languages. It was rated #10 on Inc. Magazine’s list of the Most Motivational Books Ever Written and was on HubSpot’s 20 Most Highly Rated Sales Books of All Time.

Bob is an advocate, supporter, and defender of the Free Enterprise system, believing that the amount of money one makes is directly proportional to how many people they serve.

He is also an unapologetic animal fanatic and served on the Board of Directors of Furry Friends Adoption and Clinic in his town of Jupiter, Florida.

LINKS SHARED ON THE SHOW

To take THE MICRO-QUIZ to learn which of our past shows would appeal to you, visit www.masteryunleashedpodcast.com/quiz

Mastery Unleashed (formerly Overcoming Mediocrity) is a podcast for success-driven women who want to empower their thoughts, design their dream businesses, and build beautiful lives that are aligned with their destinies—hosted by Bestselling Author and Business Strategist Christie Ruffino.

Each episode features today’s top influencers and entrepreneurs on the rise as they share empowering stories and ninja tips meant to become the FUEL that will ignite a positive change in YOUR life and the lives of others. GET THIS GIFT AND MANY MORE!

Have you subscribed to our podcast yet?
If not, I encourage you to do that today, so you don’t miss a single episode. We have a great line-up of future guests planned, and if you’re not subscribed, there’s a good chance you’ll miss out on their Ninja Tips & Gifts.

Now, if you’re feeling extra loving, I’d be very grateful if you left us a review over on iTunes, too. Those reviews go way beyond fanning the flames of our egos; they help other people find our podcast. (They’re also fun for me to go in and read.) Just click here to review, select “Ratings and Reviews” and “Write a Review,” and let me know what your favorite part of the podcast is.

We invite you to be a guest on our show.
If you have a story to share, along with a ninja tip or two, and would like to be a guest, apply here.

Read the incredible stories of a few of our guests.
Last but not least, don’t forget to pick up one of our Overcoming Mediocrity Books on Amazon.  👍

OTHER WAYS TO ENJOY THIS SHOW

OTHER WAYS TO CONNECT

Be Featured in a Future Book & Podcast

Christie Ruffino works with Speakers, Authors, and Coaches, to get them seen & heard in a BIG way by providing them multiple platforms to share their Signature Story, Ninja Tips, and Compelling Offer.

We use cookies on our website to give you the most relevant experience by remembering your preferences and repeat visits. By clicking “Accept All”, you consent to the use of ALL the cookies. However, you may visit "Cookie Settings" to provide a controlled consent.
Cookie SettingsAccept All
Manage consent

This website uses cookies to improve your experience while you navigate through the website. Out of these, the cookies that are categorized as necessary are stored on your browser as they are essential for the working of basic functionalities of the website. We also use third-party cookies that help us analyze and understand how you use this website. These cookies will be stored in your browser only with your consent. You also have the option to opt-out of these cookies. But opting out of some of these cookies may affect your browsing experience.
Necessary Always Enabled
Necessary cookies are absolutely essential for the website to function properly. These cookies ensure basic functionalities and security features of the website, anonymously.
Functional
Functional cookies help to perform certain functionalities like sharing the content of the website on social media platforms, collect feedbacks, and other third-party features.
Performance
Performance cookies are used to understand and analyze the key performance indexes of the website which helps in delivering a better user experience for the visitors.
Analytics
Analytical cookies are used to understand how visitors interact with the website. These cookies help provide information on metrics the number of visitors, bounce rate, traffic source, etc.
Advertisement
Advertisement cookies are used to provide visitors with relevant ads and marketing campaigns. These cookies track visitors across websites and collect information to provide customized ads.
Others
Other uncategorized cookies are those that are being analyzed and have not been classified into a category as yet.
SAVE & ACCEPT